What is a gene drive?

Gene drives are part of an approach that may allow scientists to modify the genes of insect pests to prevent them from being able to transmit diseases to a crop or to reduce their populations by preventing them from reproducing normally. Gene drives are part of a new strategy under development to use a genetic engineering technology called CRISPR/CAS9 (pronounced “crisper”).

How does a gene drive work?

Imagine you wanted to make a population of insects a different color. Normally, half of an offspring’s genes come from the father and half come from the mother. So, if a male with some genetic change mated with a normal female, about half of the offspring would inherit the change in the father’s DNA. This is illustrated in the figure below.

With a ‘gene drive’, genetic changes are inherited by almost 100% of the offspring. Their offspring then pass on these genetic changes to the next generation, continuing the process. This is represented in the figure below. 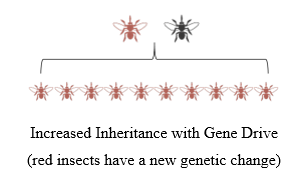 This means, in theory, if you release gene drive insects, over time they could ‘drive’ the modified genes to the entire population of that insect species (demonstrated below). These changes could potentially spread to wherever that insect occurs in the world. 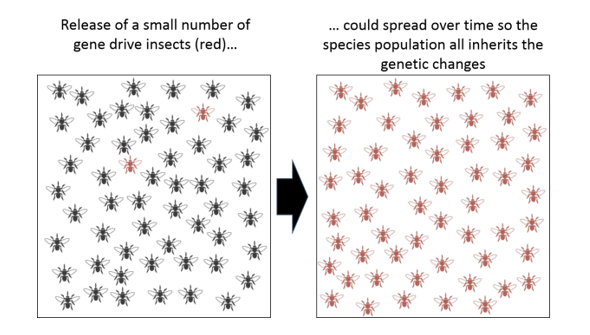 In agriculture, some scientists have proposed spreading modified genes which could prevent insects from transmitting crop diseases, or spreading genes to disrupt insect reproduction to reduce or eliminate local populations of specific insect pests.

Gene drive applications – why does this matter?

Farmers are facing serious challenges from invasive species, such as the Spotted Wing Drosophila, a fruit fly which can lay eggs inside ripening berries, and Asian citrus psyllid, which spreads the bacterium causing the hugely destructive citrus greening disease.  Gene drive insect releases could potentially help farmers save money on control costs for invasive pests, reduce pesticide spraying, and reduce prices for consumers.

The commercial and environmental benefits of releasing genetically engineered insects must be weighed against risks. The largest risk considerations include unintended ecological consequences, adverse market or trade conditions, or unfavorable public reactions.

Gene drives for agricultural pest control – what do people think?

The first national survey inquiring about American attitudes toward agricultural gene drives recently asked more than 1,000 American adults what they thought about this technique. The results show support for systems that are limited in scope and aimed at non-native insects.

The greatest design factor affecting public support was use of designs that are self-limiting, with a support rate of 57-60%.  People also support gene drives targeted at non-native species over targeting native pests, and support drives that aim to block an insect from carrying a disease 10 times more than drives that aim to reduce insect populations entirely. 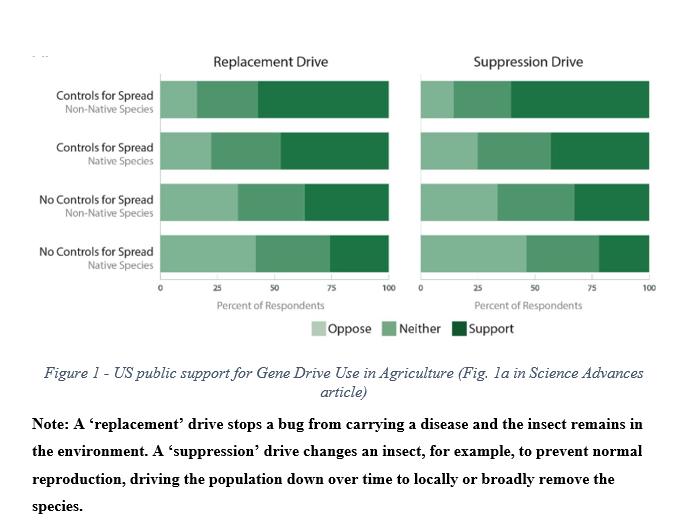 These results will be used to help inform further development of these gene drive systems in agriculture, an important consideration as the speed of technological development outpaces public understanding of the issues surrounding the technology.

Moving research forward keeping an open ear to the public

“This is the right time – while the technology is still under development and before any release decisions have been made – to gain insights into what the public thinks, what types of information they prioritize from researchers, and who is trusted to carry out this sensitive research,” said Michael Jones, author and NC State Ph.D. candidate in agricultural and resource economics. “Proactively incorporating this feedback into technology design and risk assessment helps align the science with public values and the needs of diverse economic ecosystems.”

Spotted wing drosophila and citrus psyllid are not serious economic problems for Wisconsin agriculture. However, these and other smaller, geographically limited applications of gene drives are excellent ways to prove the concept and refine the methods.

Pending the outcome of these limited-scale applications, we are likely to eventually see implications for row crop agriculture such as the management of serious and widespread pests such like corn rootworm, European corn borer, soybean aphid and Colorado potato beetle. Applications which could provide tremendous benefits to Wisconsin producers.

Furthermore, there are likely to be future implications of gene drive technology in the prevention of the spread of diseases humans get by from insects. In Wisconsin we could see gene drive applications used to control tick populations which drive the spread of Lyme disease.

The take home message is that applications of gene drives may eventually come to Wisconsin and not just be something used in faraway places for tropical diseases and crops not grown here.

Want to learn more about this research? Read the full research article here.

Still have more questions? Let us know! Email us at renk@aae.wisc.edu

Interested in CRIPR and want to learn more? Come find me at CRISPRcon Midwest next week! On October 8th, I’ll be leading an informal roundtable discussion on Applications of Gene Editing to Agricultural Pest Management during the lunchtime Ideas Marketplace session. Get more information about this event and register here.